The underlying principle to all our training is that it should be fun for dog and handler. Dogs learn by repetition, and a repeated behaviour that is rewarded in a manner that has value to the dog will be learned quickly and become second nature. Rewards increase motivation and focus in the dog, which leads in turn to an enhanced desire to learn. Any breed will respond to a reward based training approach and the result can be either a well behaved companion, or a partnership that will succeed in competition or both! Equally, rewarding the wrong behaviour will get bad habits! 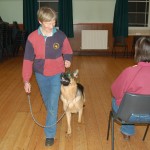 Susie takes the pet obedience and competitive obedience classes. She uses food rewards and tuggy toys to achieve the behaviour she asks of her dogs. She competes very successfully at Open obedience shows with her German Shepherd Dogs. 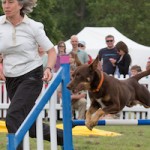 Michèle Phillips with Lily at Dogfest 2015

Michèle has been competing in agility for over 16 years. Her first dog became the first German Shorthaired Pointer to win an Agility Warrant in the UK and her second GSP (Lily) was the first GSP to win a Grade 6 agility class. She currently runs Roo a Grade 7 Australian Kelpie and her youngster Holly a Jack Russell x Chihuahua who runs at a Grade 5

Julie has been competing and training for over 20 years. She has trained and competed with 5 of her own dogs (mostly GSD rescues) and is currently competing at Grade 6 with her Manchester Terrier Jester (who is also a qualified Expert Trick Dog). Julie is a qualified Kennel Club Agility Judge regularly judging at Kennel Club Open Agility shows throughout the UK. She says she just loves the sport and takes great pleasure introducing people to it and supporting them on their journey. She teaches foundation, beginner and competition groups.

Elaine has been competing in agility for over 10 years. She currently has two flat coated retrievers – 7 year old Tia and 3 year old KT. Tia is competing at KC Grade 5 and UKA Champ Level. KT has just started competing and is gradually growing in confidence over courses. When training handlers and their dogs Elaine finds it is extremely rewarding to see the progress made by each partnership.

I started Agility 10 years ago with my Collie Bear and quickly became hooked on it.

During my years competing with Bear he progressed to Grade 3. We were also chosen to represent the South Cotswold Dog Agility Team in the 3 Counties Starters League 4 years running. South Cotswold won this event 3 years in succession and Bear and I won the Runners Up Trophy for the Best Dog/Handler in 2014/15. I then shared the Captaincy of our Starters League Team for the following 2 years.

I also became Julie Bearder’s Assistant Trainer for a number of years, where I learned all the skills I needed to teach agility before being asked to become the Beginners Trainer.

I now run Luna a 3 year old Miniature American Shepherd who, in the first year of competing, progressed to Grade 3.

At present I teach 2 Beginners Classes and 1 more Advanced Class. I love competing with Luna but love teaching as much, if not more, than competing. There is nothing better than watching owners and their dogs having fun whilst learning the agility skills they need to progress to their next Trainer.

Also in this section

To comply with Government guidelines, the club is closed until further notice