NB: this article was written in 1996 by Dorothy Blair, our then Chair of the committee.

South Cotswold DTC originated as a branch of Stroud DTC and first met in the Town Hall, Nailsworth one Friday in June 1962. On that evening some members came from Stroud to show what Obedience was all about. At that time there were fewer dog training clubs and dog obedience was much less well known than it is today. I don’t remember much about that first meeting except being very impressed by a line of dogs doing a “sit stay” and how quiet and well behaved the dogs were. (I had a very exuberant and out of control Goldie cross.)

The trainers that evening were Don & Beryl Ross with their very well behaved Goldies, Jane and Valda. Don & Beryl stayed with the Club until Don retired in 1986, and they moved north to Dalbeattie. During that time they set a high standard of training and also the way the club was organised. The emphasis was on “this is a club, not just a training class” and everyone coming to join must be welcomed and given as much help as possible. I hope we have maintained this aspect of the Club and that you are all happy to be members of the South Cotswold DTC. 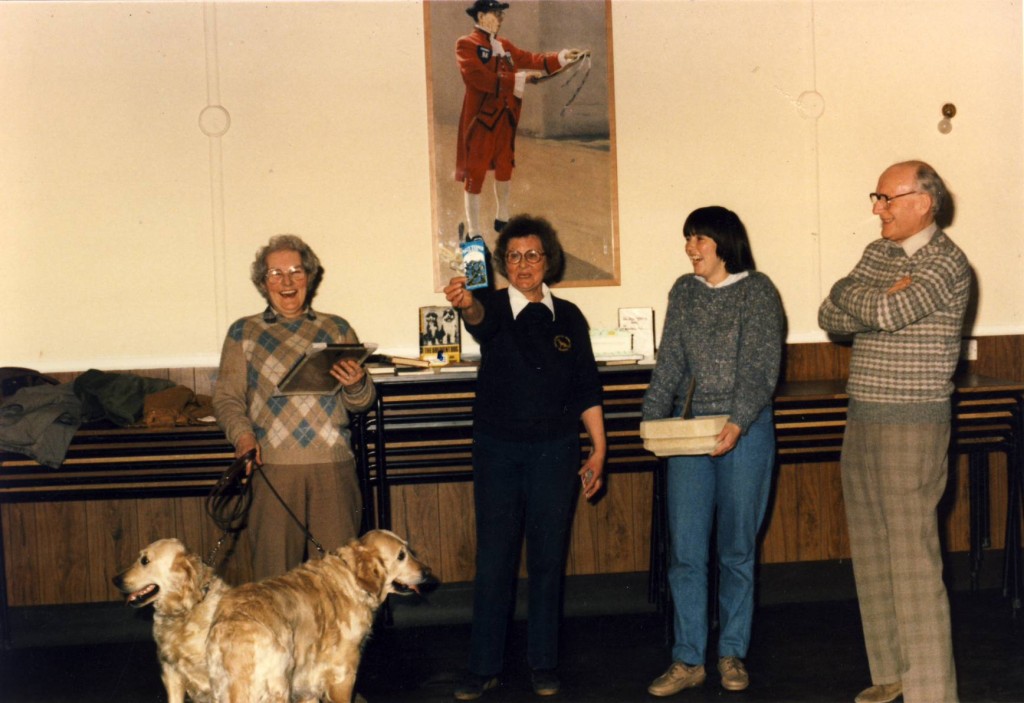 When I joined the Club training methods were very different from today’s; every dog had to wear a choke (check) collar which had to be fitted correctly or the dog really did choke. Corrections were made by a jerk on the lead which immediately tightened the chain – rather unpleasant for the dog. There were no titbits or toys used in training, nor was there playtime, but the dogs did get plenty of praise when they got the exercise right. Heelwork was taught by walking the dogs altogether in a large circle and being corrected by a quick jerk if they attempted to interfere with another dog. Strangely enough they did learn to walk to heel but not as closely as they are expected to do in competitions these days.

In 1967, it was decided to open a branch in Dursley, so now we had three branches run by a central committee consisting of members from each branch. During the ensuing years, competitions were held between the branches three times a year when there were rosettes and cups to be won and also a cup for the winning branch. The training in the branches was fairly even, so the cups passed round the branches.

During this time Don & Beryl presented a cup to be competed for by demonstration teams from each branch. The competition was held after the AGM, thus ensuring that most members attended the meeting. The teams were judged by outside judges who marked on the appearance of the team, the commentary and the content of the demonstration. This was always a popular event and the branches put in a lot of hard work to produce the best team. In those days obedience demonstrations were very popular at fêtes, garden parties etc. These days dog agility where there is more activity is more popular. 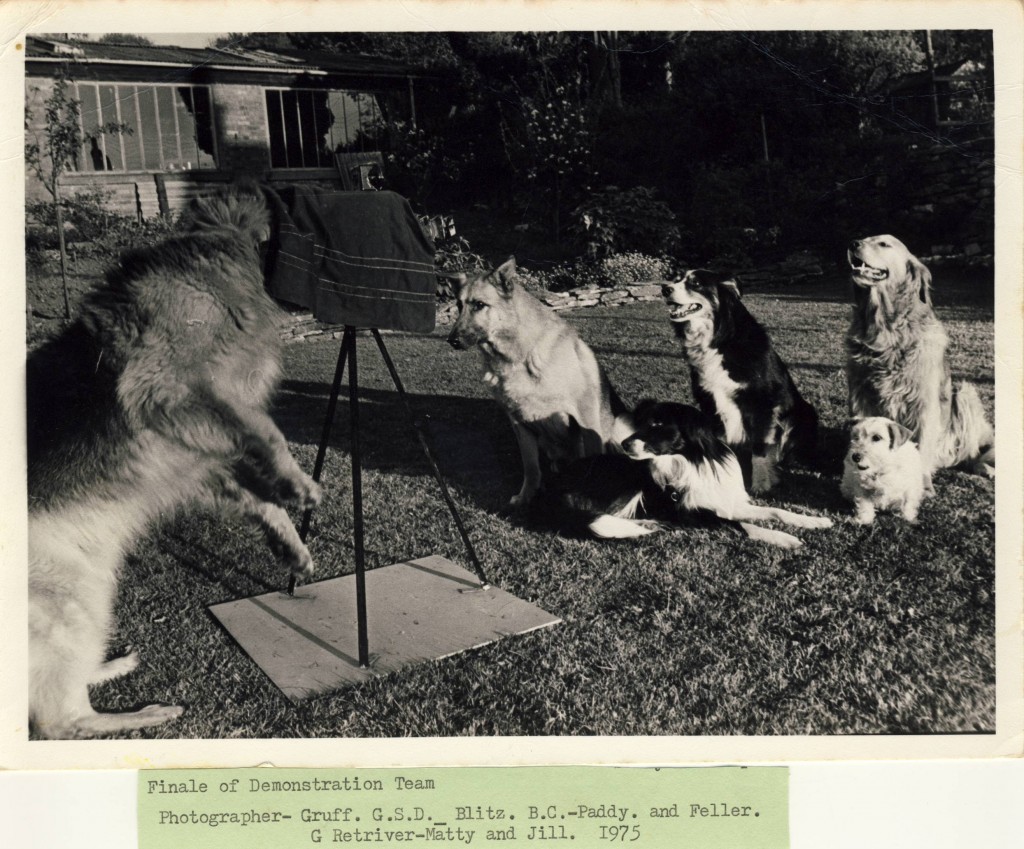 The Club continued with the three branches for some years. In 1973 members paid a training fee of 15p for the first dog and 10p for a second dog being trained on the same evening. Handlers who were under 15 or over 60 paid 5p! At the AGM in 1977 branches were given control of their own finances, just paying joining fees (£1 for each new member) and the insurance (25p per member) to the Central Committee who were responsible for paying the Kennel Club dues and the insurance.
Shortly after this AGM it became apparent that there was some discontent in the Club, partly because the club competitions were not being organised on the agreed dates and partly because there were a number of members who did not want to take part in competitive obedience. As these members were from one branch it made it difficult for that branch to compete .

It was decided to hold a meeting at a neutral venue (The Crown & Anchor, Stonehouse) to try and come to some amicable agreement. It was at this meeting in April 1978 that the South Cotswold Dog Training Club was born. As I remember at that meeting there were some quite heated arguments and at one stage it was suggested adjourning the meeting; eventually at Don Ross’ suggestion it was decided that as the branches were now of all equal strength, the Club should have a new title of South Cotswold DTC and this was registered with the Kennel Club. However, this did not please all the members and in 1979 Stroud Branch decided they would like to become a separate club and revert to the title Stroud DTC. After numerous discussions at committee level, it was agreed that Stroud should no longer be part of South Cotswold DTC. They were given a share of the money held by Central Fund and also some of the cups which had been specifically presented to the Stroud Branch.

After this the two branches continued to hold club competitions just twice a year and both branches flourished. Dursley hit a bad patch when they were without a trainer but at Nailsworth we were very fortunate as Don ran training classes for would be trainers, showing them how to conduct a class and how to teach (very necessary) so we were never without trainers. Dursley managed to get over this difficulty and stayed open until 1989 when they were forced to close as there wasn’t a hall in the Dursley area that would accept dogs. Now Nailsworth became South Cotswold DTC. The monies from Dursley and the Central Fund (no longer needed) were banked in a separate account and held there for four years to be available if a Dursley member wished to re-open the branch. As this did not happen the money was transferred to our account.

In 1987, we celebrated our 25th anniversary and Don and Beryl were invited to come and cut the cake. We invited as many previous club members as we could remember and contact and had a very happy evening talking about old times and looking through the photo albums. Each class gave a short demonstration and I think some of the older members were quite surprised at the different training techniques. 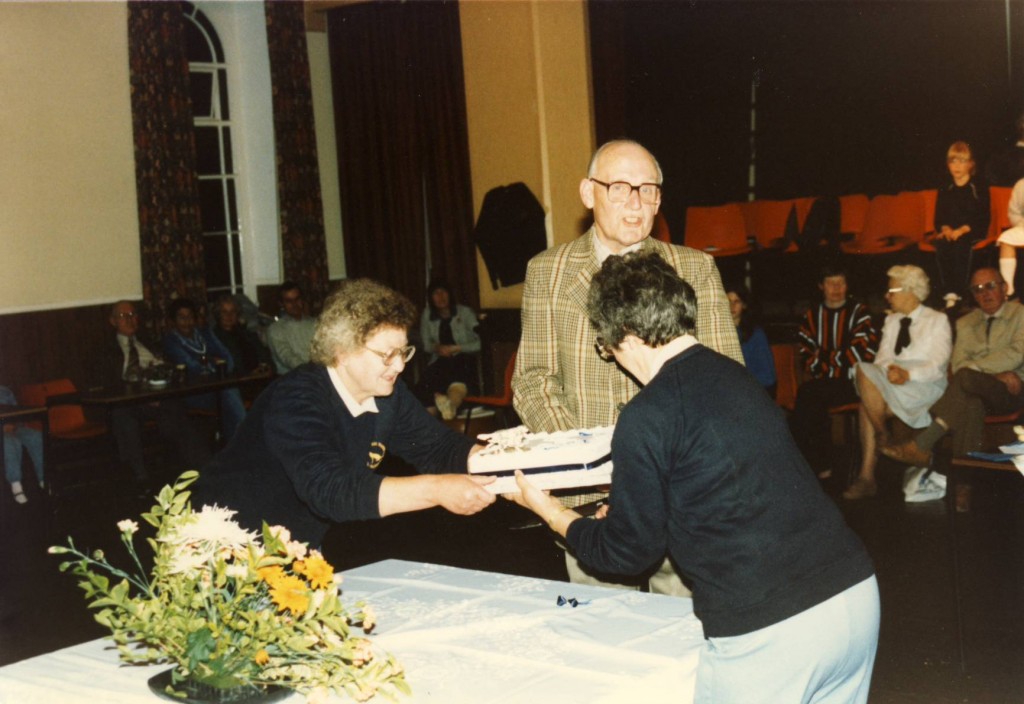 For the last 10 years the Club has continued to flourish, the introduction of a puppy class which dogs may join when they are fully inoculated has proved most successful. Prior to this dogs were not accepted by the Club until they were 6 months old by which time they could have developed some undesirable habits. Because of the number of “rescue dogs” which are over 9 months old (too old for the puppy class) we have a ‘Good Dog” class, both these classes teach basic obedience, the kind of thing every dog should learn so that it can become a happy member of society.

The Club holds various events during the year. We have two club competitions where there are classes for beginners up to advanced and at Christmas we have a party (with party games of course) where members are encouraged to bring their dogs and themselves in fancy dress. This is always popular and members are invited to bring their families with the children being well catered for.

During the summer months a sponsored walk is organised with the proceeds going to a charity chosen by members. This is usually well supported as it includes a pub lunch.

There are three Fridays in the year when we have to vacate the hall; so in March we have our club dinner, just a social gathering and no dogs. In August, weather permitting, we do some training outside in the playing fields; and in November we hold a skittles evening, generally challenging the Cotswold Players to a match, always a hilarious occasion, we don’t have many skittlers. The other big event of the year is the Open Show which we run in May. This year we held it in the playing fields in Nympsfield and had over 500 entries with dogs coming from a very wide area. For this event we need a lot of extra helpers and by next April I expect Pat will have asked most of you if you will be available to help.

Also in May we send a team to the annual Guide Dog Rally. This is a team event between 10 clubs, each club taking it in turn to be the host. This year and last year our team were the winners, so keep training your dogs, every year we are looking for new dogs to take part. There are classes from beginners to advanced. The object of the rally is to raise money for The Guide Dogs for the Blind Association.

As the Club has grown it became necessary to hold the top class (advanced) on a separate evening, no dog wants to train at 10pm, so we now meet in Christ Church hall on Thursday evenings at 7.30. Most handlers in this class are entering their dogs in competition.

As well as obedience classes, we have a very popular agility section which is going from strength to strength and recently gave a very impressive demonstration at Archway School fete.

During my years with the Club I have made so many good friends, several of whom have left the district but still keep in touch. There have been many happy times, lots of funny happenings and of course some sad times – our dogs are not everlasting, but I can truthfully say I have never regretted joining the Club that evening in June 1962.

Also in this section

To comply with Government guidelines, the club is closed until further notice